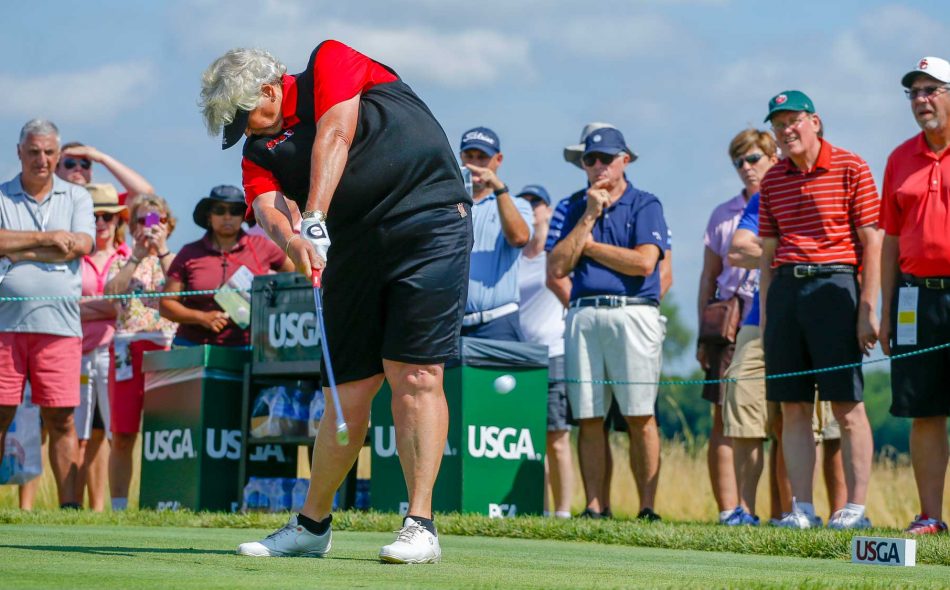 ABOUT BROOKLAWN COUNTRY CLUB
Brooklawn Country Club has a strong tradition of giving back to the game through the hosting of numerous amateur and professional championships, including four previous USGA championships: the 1974 U.S. Junior Amateur, won by David Nevatt; the 1979 U.S. Women’s Open, won by Jerilyn Britz; the 1987 U.S. Senior Open, won by Gary Player; and the 2003 U.S. Girls’ Junior, won by Sukjin-Lee Wuesthoff.

Brooklawn joined the United States Golf Association in 1896. The original golf course was a nine-hole layout on what was then rolling farmland. The course was expanded to 18 holes in 1911. Almost 20 years later, A. W. Tillinghast, one of history’s premier golf architects who also designed courses at Winged Foot Golf Club, Baltusrol Golf Club, Bethpage State Park and Quaker Ridge Golf Club, redesigned the course at Brooklawn into its present form. Over the years, very thoughtful changes have been made with the guidance of course architect Ron Forse, who specializes in Tillinghast designs. The intent has been to maintain the integrity of what Tillinghast built, but to adapt certain aspects of the course to the modern game.

Several widely recognized golfers have been associated with the club. Gene Sarazen, one of five players to have won all four professional men’s major championships, worked as an assistant golf professional at Brooklawn in his teenage years and maintained a lifelong relationship with the club. Georgianna M. BishopBishop, one of the early champions of women’s golf, was a Brooklawn member who captured the 1904 U.S. Women’s Amateur at Merion Golf Club.

The championship is open to any female professional or amateur who is 50 years of age on or before July 29 and whose Handicap Index does not exceed 7.4. Entries closed on June 9.

In 2021, qualifying was conducted over 18 holes at 16 sites nationwide between June 15 and July 15. Qualifying sites were located in 15 states, including two in California.

A starting field of 120 players will be cut after 36 holes to the low 50 scorers and ties.

Eighteen holes of stroke play are scheduled each day from Thursday, July 29, through Sunday, Aug. 1. In the case of a tie after 72 holes, a two-hole aggregate playoff will commence immediately following the conclusion of the fourth round.

The total purse for the 3rd U.S. Senior Women’s Open is $1 million. The winner will receive approximately $180,000.

WHAT THE CHAMPION RECEIVES

The USGA’s fourth Open championship was announced in 2015 in recognition of the growth of women’s golf and the increasing number of worthy age-eligible competitors from around the world. Made of sterling silver, the trophy celebrates the accomplishments of its competitors as well as the opportunity this championship represents. Its design elements include olive leaves, which symbolize intergenerational inspiration; the USGA seal, marking the organization’s longstanding commitment to the game of golf; a pineapple crown, signifying that the championship is open to all; and round beads encircling the base that denote femininity and honor the significant role women have played in the game’s history. Designed and produced by Nicholas Winton, Ltd., of Cheshire, England, the trophy stands 22 inches tall, is 12 inches from handle to handle and weighs 13 pounds, making it the heaviest of the four USGA Open championship trophies.

The 2021 U.S. Senior Women’s Open will be the 14th USGA championship contested in Connecticut and the state’s first USGA championship since the 2008 U.S. Girls’ Junior, which was won by Lexi Thompson at Hartford Golf Club in West Hartford.

MOST USGA CHAMPIONSHIPS HOSTED BY VENUES IN CONNECTICUT

The USGA will offer daily complimentary high-resolution photographs during the U.S. Senior Women’s Open (Monday-Sunday) for editorial use only. For more information, email photorequests@usga.org.

All media can access the U.S. Senior Women’s Open page in the online Media Center, which will include important and regularly updated championship information, such as tee times, hole locations and player interview transcripts. It can be accessed directly by using mediacenter.usga.org/us-senior-womens-open.


The Sagamore, a Lake George Donald Ross Gem and more.