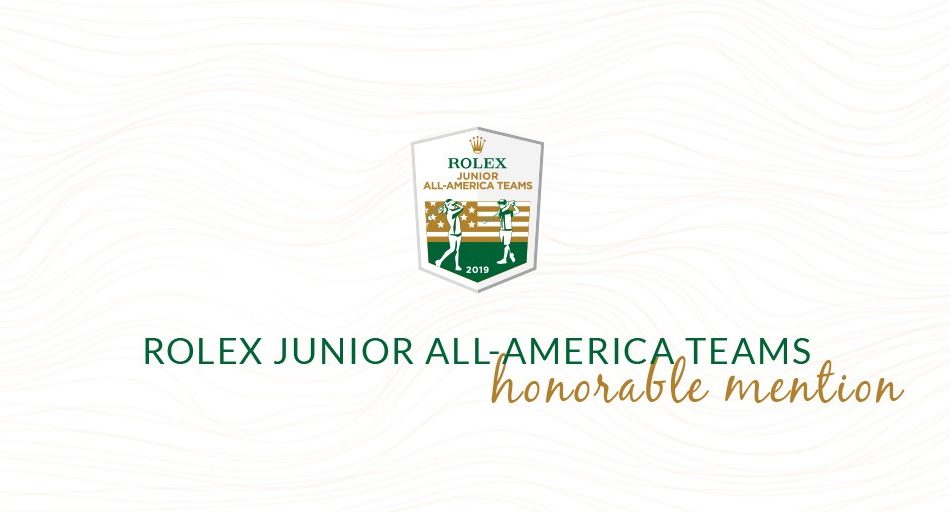 Boston-area native to be honored by Rolex, AJGA as one of junior golf’s best

BRASELTON, Ga. – Michael Thorbjornsen of Wellesley, Massachusetts, was named an honorable mention Rolex Junior All-American by the American Junior Golf Association, establishing himself among the top tier of current and former junior golfers from around the world for the second year in a row.

Introduced by the AJGA in 1978, the Rolex Junior All-America Teams annually recognize the world’s premier junior golfers. The 2019 Rolex Junior All-America Teams are comprised of 96 junior golfers, 48 boys and 48 girls, ages 14-19, from 25 states and eight countries, including Australia, Canada, China, Japan, South Korea, United Kingdom, United States and Venezuela. These young men and women distinguished themselves through outstanding play in 135 national junior golf events, 120 of which were conducted by the AJGA. The teams were determined exclusively through the Rolex AJGA Rankings as of October 15.

An unrivalled reputation for quality and expertise

Rolex, a Swiss watch manufacture headquartered in Geneva, is recognized the world over for its expertise and the quality of its products. Its Oyster Perpetual and Cellini watches, all certified as Superlative Chronometers for their precision, performance and reliability, are symbols of excellence, elegance and prestige. The word “Perpetual” is inscribed on every Rolex Oyster. But more than just a word on a dial, it is a philosophy that embodies the company’s vision and values. Hans Wilsdorf, the founder of the company, instilled a notion of perpetual excellence that would drive the company forward. This led Rolex to pioneer the development of the wristwatch and numerous major watchmaking innovations, such as the Oyster, the first waterproof wristwatch, launched in 1926, and the Perpetual rotor self-winding mechanism, invented in 1931. Rolex has registered over 500 patents in the course of its history. A truly integrated and independent manufacturing company, Rolex designs, develops and produces in-house the essential components of its watches, from the casting of the gold alloys to the machining, crafting, assembly and finishing of the movement, case, dial and bracelet. Furthermore, Rolex is actively involved in supporting the arts and culture, sport and exploration, as well as those who are devising solutions to preserve the planet.

About the American Junior Golf Association

The American Junior Golf Association is a 501(c)(3) nonprofit organization dedicated to the overall growth and development of young men and women who aspire to earn college golf scholarships through competitive junior golf. The AJGA provides valuable exposure for college golf scholarships and has an annual junior membership (boys and girls, ages 12-19) of more than 7,400 members from 50 states and nearly 70 foreign countries. Through initiatives like the Achieving Competitive Excellence (ACE) Grant, a financial assistance program, and Leadership Links, a service-oriented platform that teaches juniors charitable-giving skills, the AJGA fosters the growth of golf’s next generation.

AJGA alumni have risen to the top of amateur, collegiate and professional golf. Former AJGA juniors have compiled more than 1,000 victories on the PGA and LPGA Tours.

Alexa Pano of Lake Worth, Florida (3)