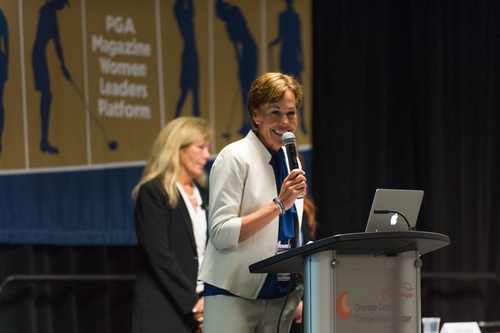 Whaley will be honored at the MGA’s 122nd Annual Meeting & Dinner on Dec. 4

ELMSFORD, N.Y. (November 6, 2019) – The Metropolitan Golf Association is pleased to announce Suzy Whaley as the recipient of its 2019 Distinguished Service Award in recognition of Whaley’s pioneering service as the first woman president of the PGA of America and her longtime commitment to growing the game.

The MGA Distinguished Service Award, created in 1973, is presented annually to a candidate who has contributed “distinguished service to golf and its related activities, consistent with the valued standards and honorable traditions of the game.” Some of its earliest winners include Joe Dey, Harry Cooper, Robert Trent Jones, Sr., and P.J. Boatwright, while names such as Dave Anderson, David Fay, Jimmy Roberts and Jim Nantz have received the honor in recent years.

“We couldn’t be more thrilled to present Suzy with our Distinguished Service Award this year,” said former MGA President and chair of the DSA committee Jeffrey Holzschuh. “Throughout her career, Suzy has played, instructed, and served the game at the highest level, making her a role model not only for women, but for anyone pursuing a career in golf.”

Seeking more opportunities to play, Whaley joined the PGA of America in 2001 upon the suggestion of her husband Bill, also a PGA professional. She became the head professional at Blue Fox Run in Avon, Conn., in 2002 and in the same year won the Connecticut PGA Championship. The victory earned Whaley an exemption into the PGA TOUR’s Greater Hartford Open in 2003, making her the first woman since Babe Zaharias in 1945 to qualify for a PGA TOUR event.

In addition to enjoying added playing opportunities, Whaley became involved on committees with the Connecticut Section PGA. Already a passionate instructor, her experiences further fueled her drive to grow the game and serve in a greater capacity. She became a board member at the section level, then was elected secretary of the PGA of America in 2014 and vice president in 2016 before taking post as president in 2018.

In her role as president, Whaley has remained devout to the organization’s mission to grow the game, especially when it comes to introducing opportunities to kids and women. Many of her actions since joining the national board have focused on these areas, from her work to develop programs that encourage diversity and improve instruction models to her involvement with the debut of the KPMG Women’s PGA Championship and the continued development of PGA Junior League.

Whaley’s passion for the game developed at a time when women weren’t always openly accepted on the golf course. Only able to play at certain times, she enjoyed the game alongside her mother and went on to play at University of North Carolina at Chapel Hill. She intended to attend law school, but upon receiving an offer for support to pursue a professional career, Whaley’s life was changed.

She played on the LPGA Tour for two seasons before shifting her focus to teaching. Whaley spent five years at Jim Flick Golf Schools and developed into one of the nation’s top instructors. Twice she was named Connecticut PGA Teacher of the Year. Currently, Whaley – a PGA Master Professional – is the Director of Golf at Suzy Whaley Golf based out of Cromwell, Conn., and is the PGA Director of Instruction at the Country Club at Mirasol in Palm Beach Gardens, Fla.

“We’re looking for people who truly give back to the game and have a history of long and exemplary service,” said Tod Pike, MGA President. “Suzy is such a role model. Not only has she paved the way for women in the game, she’s a great advocate for all golfers of every level and skill.”

“I’m so honored,” said Whaley. “The MGA embodies the best values of the game. I couldn’t be more proud to share that passion, and to receive this award.”

The award will be presented at the MGA’s 122nd Annual Meeting and Dinner on Wednesday, December 4 at Westchester Country Club in Harrison, N.Y.

About the MGA: The Metropolitan Golf Association was founded in 1897 and is one of the nation’s oldest and largest amateur golf associations representing more than 550 clubs in the tri-state Metropolitan Area. Through a network of more than 300 volunteers, and a full-time staff operating out of its Golf Central headquarters in Elmsford, N.Y., the Association fulfills its role as a true non-profit service organization. Through a variety of unique, relevant, and innovative services for member clubs and area golfers, the MGA has established itself as a leader among local and national golf organizations.