Spring Golf: Best And Worst American States To Play According To Weather Study 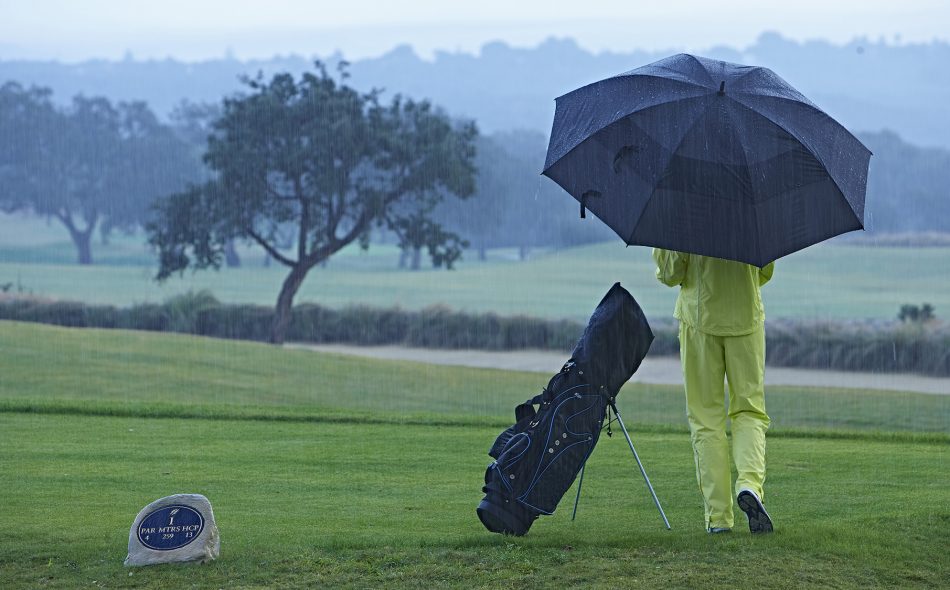 Spring is officially here, and many cannot wait to enjoy golf in finer weather conditions compared to winter.

Interested in playing conditions, GolfSupport.com analyzed weather conditions to establish which American states are the best and worst to play golf during spring.

For the study, Golfsupport.com created an index that considered important spring weather variables for golf such as precipitation (mm), temperature (°F), average number of clear days, humidity, and wind speed (kph). The maximum score each state could possibly score was 500.

GolfSupport.com found that Florida is the American state that takes the crown for having the best weather conditions for Golf during spring, scoring an impressive 414 points in the index. Out of the top ten states, Florida scored the most favourable for the temperature variable at 100, as temperatures in the southeastern state soar to an average of 69.9 °F in spring.

The second-best American state to play golf in spring is Arizona with an index score of 337. Compared to Florida, 77 less points. Arizona scores maximum points (100) for the average amount of sunshine and clear days in spring. 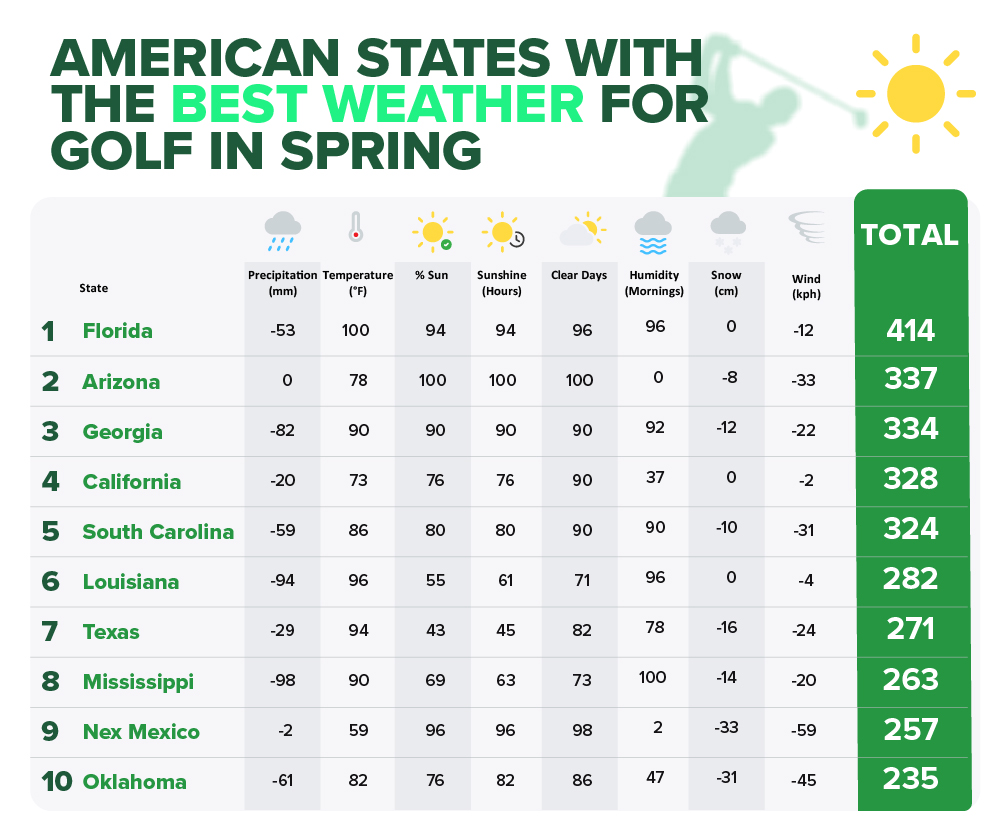 In spring, Arizona averages 1,079 hours of sunshine and an average of 52 clear days. Georgia is in third position with a score of 334 points. Humidity is the variable that Georgia scores the best for at 92 out of 100. This is fantastic news for golfers in the ‘peach state’, as golf balls tend to travel farther the more humid it is.

California (328) and South Carolina (324) are among the other American states that score more than 300 points for their golfing weather viability during the spring months, respectively ranking fourth and fifth.

Rounding off the top ten is Oklahoma with an index score of 235. Slightly above Oklahoma in ninth spot with 22 more points is New Mexico, with the southwestern state scoring an overall 257.

Vermont is the worst American state to enjoy golf in spring, scoring an unfavorable -155. Vermont scores particularly poorly in the wind (kph) category with -65. The average wind speed in Vermont is 18.1mph during spring, which will undoubtedly play a significant part in altering the direction of a golf ball when in flight.

In second position is New York with a score of -88. The big apple scores particularly poorly for snow (cm) at -100. In New York there is an average of 66 snow days and snow reaches an average 315cm once settled on the ground in spring. 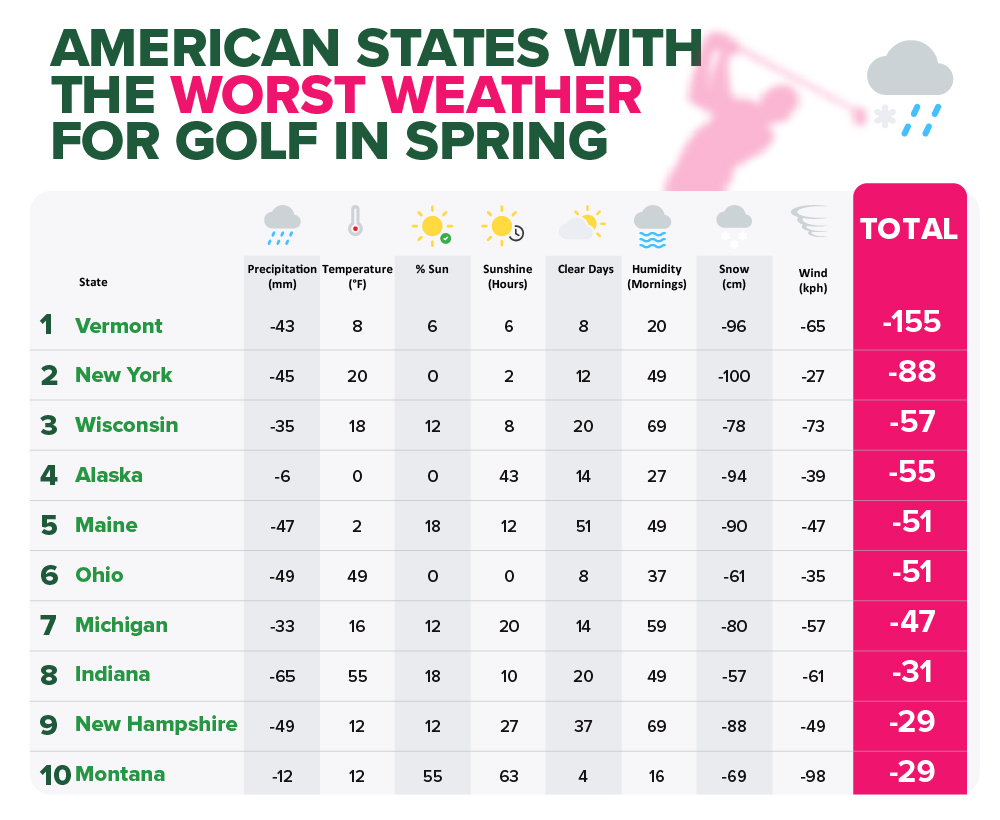 Wisconsin (-57), Alaska (-55), Maine (-51) and Ohio (-51) are among the other American states that score more than -50 for their adverse weather conditions to play golf in during the spring months, respectively ranking third, fourth and joint fifth.

In joint eighth spot is Montana (alongside New Hampshire) with a score of -29. The western state suffers from a lack of clear days in spring, scoring only 4 points for the variable. In spring there is only an average of 751 hours of sunshine – meaning visibility on the course could be a real issue for those golfing in the ‘treasure state’ this spring.

1) GolfSupport.com sourced average spring climate data from https://www.currentresults.com/index.php. The data are based on results made available by the NOAA National Climatic Data Center of the United States.

2) Temperature -state-wide averages calculated from temperatures recorded during the months of March, April, May, and June (i.e. spring months). The results are measured in Fahrenheit (°F).

3) Precipitation – state-wide averages for the amount of rain and snowfall per month in spring. Results are shown in millimetres.

4) % sun number measures the percentage of time between sunrise and sunset that sunshine reaches the ground.

5) Total Hours is the average number of sunny hours a state normally has in spring.

6) Clear days is the average number of days in spring when cloud covers at most 30 percent (%) of the sky during daylight hours.

7) Snow – the total amount of snow and for how many days it snows at least 0.25 centimetres. The snowfall totals are annual averages based on weather data collected from 1981 to 2010.

8) Wind – shows the average annual wind speed by state in mph. Therefore, it is assumed theannual average is the same during the spring months. Sourced from http://www.usa.com/rank/us–average-wind-speed–state-rank.htm

9) Data for all measures have been standardised using the PERCENTRANK.INC function in Excel. This ranks the figures of each number within a given factor between 0 and 100. Further, the measures that are assumed to have a negative impact on the golfing experience (e.g. precipitation, snow, wind, etc.) are multiplied by -1 to reflect this. The maximum score possible is 500.