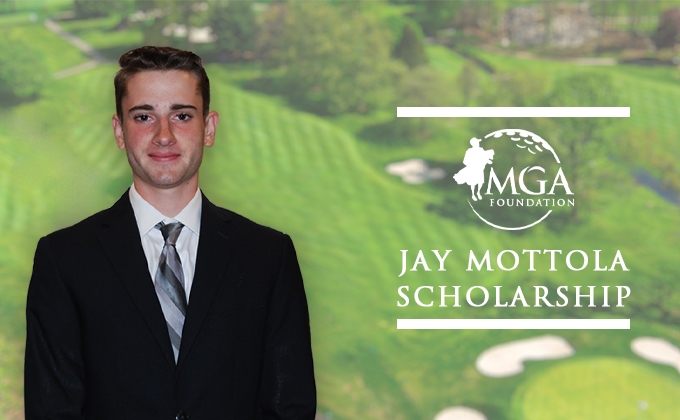 The MGA Foundation is pleased to announce Samuel Masters of Rye, N.Y., as the inaugural recipient of the Jay Mottola Scholarship. Masters has caddied five seasons at Bonnie Briar Country Club in Larchmont, N.Y., and is studying economics at Binghamton University, where he is on track to complete his degree in 2022.

“I am honored to be the first recipient of the Jay Mottola Scholarship,” said Masters. “When I started working at Bonnie Briar Country Club, I never could have imagined the journey it would take me on and the impact it would have on my life.”

Masters began to caddie in July 2015 and took an additional job the following summer, setting his sights toward furthering his education. Masters continued to develop valuable life skills as a caddie, while an internship with a New York City venture capital firm at the end of his senior year helped him gain experience in finance as he headed to Binghamton.

“We are thrilled that Sam is the recipient of the first Jay Mottola Scholarship,” said Johanna Gavin, Director of the MGA Foundation. “As a hard-working, determined, generous and caring young man, Sam displays qualities synonymous with the legacy Jay has made.”

“It was gratifying to see so many great candidates apply, and my family and I are delighted that Sam Masters is the first recipient,” said Mottola. “Sam has an outstanding academic and extracurricular record and impressed the selection committee as a terrific young man. I know the scholarship will help Sam as he completes his college studies at Binghamton University.”

At Binghamton, Masters has kept a schedule that shows his drive to succeed. He continues to gain relevant work experience in his field while also maintaining focus on academics and creating time to volunteer with Big Brother Big Sister and be an active member of the Binghamton Finance Society.

“In addition to the principles a young person learns while working, it is now clear to me that caddieing provided me the opportunity to realize my goals,” said Masters. “I feel more determined than ever to succeed both academically and personally.”

“Sam has overcome a number of obstacles and with the help of the Jay Mottola Scholarship, the obstacle of paying for his college tuition is one less he has to worry about,” said Gavin.

The MGA Foundation announced the creation of the Jay Mottola Scholarship in December of 2018 to celebrate the longtime former MGA executive director. Mottola was introduced to the game as a young caddie at The Tuxedo Club and supported youth caddie initiatives throughout his 40-plus years with the MGA.

“Working as a caddie and on the grounds crew at The Tuxedo Club growing up helped start a lifelong love for the game and had a big influence on my career at the MGA,” said Mottola. “So, having the scholarship named in my honor means a great deal to me. I’d like to thank the MGA, the Foundation and the many friends and colleagues who helped create and fund.”

The Jay Mottola Scholarship is a significant financial grant awarded to an outstanding caddie or young person who works in service to golf in the Met Area, with representatives from local caddie scholarship funds (Long Island, New Jersey and Westchester) creating a selection committee.

“The candidates nominated by their local CSFs were exceptional student leaders and had shown dedication in their service to golf, completing many more years at their respective clubs than the two-year requirement,” said Gavin. “The Scholarship Selection Committee was so pleased to hear how influential the candidates’ experiences in the game of golf were in developing their character. We look forward to growing the family of Jay Mottola Scholarship recipients in the coming years and seeing the impact it has on their lives.”

Look for more on Samuel Masters and the Jay Mottola Scholarship in The Met Golfer and on mgagolf.org.