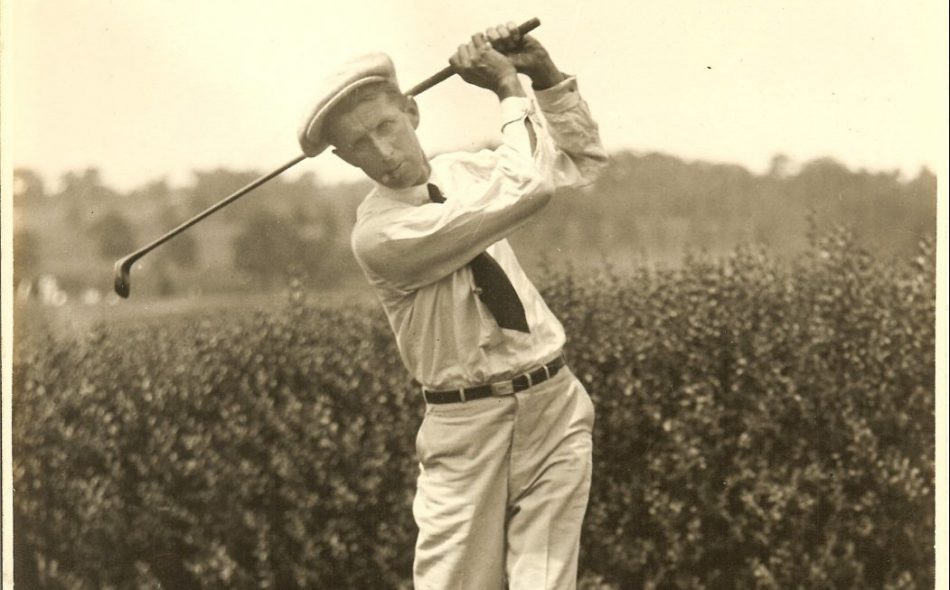 February 1, 2021 – Three of the greatest players in local history, Jim Barnes, Max Marston, and Marge Mason will be inducted into the New Jersey State Golf Association Hall of Fame as the Class of 2021 later this year.

The annual ceremony and reception, which is typically held during the spring, is expected to be held later in 2021 due to the ongoing pandemic. When it is held, the ceremony will celebrate members of both the Class of 2021 and the Class of 2020, which has yet to receive its honor due to COVID-19 concerns.

“Winning a national championship is the ultimate goal for both amateur and professional players. In the 120+ years of New Jersey golf history, only a handful of players have done it. The inductees in our 2021 Class consist of a male amateur (Max Marston) a female amateur (Marge Mason) and a male professional (Jim Barnes) who have all achieved this remarkable feat,” stated NJSGA president Eric Houseknecht.

“At the height of their respective careers, each was recognized as being one of the top players in the country, and they are all highly deserving of a place in our Hall of Fame.”

Established in 2018, the NJSGA Hall of Fame exists to recognize and enshrine men and women who, as New Jersey natives or residents at their time of achievement, have impacted New Jersey golf and/or have made extraordinary contributions to the game. Its mission is to honor New Jersey’s finest amateur and professional golf competitors, as well as those who are contributors to golf, such as architects, journalists, superintendents, mentors, volunteers and others.

A look at the members of the NJSGA Hall of Fame Class of 2021:

By the time “Long” Jim Barnes became the fifth professional to work at Essex County CC, in 1939, he had already made his mark on the world of golf.

Born in 1886, he left England in 1906 for California. He won the 1916 and 1919 PGA Championships, the 1921 U.S. Open, and the 1925 British Open. He was the first player to win three legs of the four majors (he was invited to the inaugural Masters at age 47 but did not play), and today is among elite company as one of only twelve to accomplish the feat.

His last notable triumph came in 1939, when he won the NJSGA Open Championship in his first year at Essex County Country Club, making him the oldest ever at 53 to win it. In the ‘39 Open, played at defunct Yountakah Country Club in Nutley, Barnes recorded a 289 total (playing through a rainstorm in the final round) to defeat two-time champion, Johnny Kinder of Plainfield Country Club, by three strokes.

Barnes was a distinctive individual who stood out on the golf course, not only for his statuesque size of 6-feet-4, but for his curly hair and a stalk of clover hanging from his mouth. It is said he chewed the stem to relieve his thirst, but equally as much he believed it was a good luck charm.

The moniker “Long Jim” came about not only from his height but also from his penchant for wearing long trousers in the era of “knickerbockers,” or “knickers,” short pants worn just below the knee.

Barnes passed away in 1966 at the age of 80 in East Orange, N.J. In 1989, twenty-three years after his death, he was inducted into the World Golf Hall of Fame.

It’s been nearly a century since Max Marston, who grew up in Cranford, won the 1923 U.S. Amateur Championship. Marston’s 1923 season is regarded as one of the best single-year performances by an amateur golfer and is considered to rival only the Grand Slam season of 1930 by the immortal Bobby Jones.

Marston’s stellar 1923 campaign began with winning his two matches in Scotland during his second Walker Cup appearance. He returned home to capture the Golf Association of Philadelphia’s stroke play (Patterson Cup) and match play championships in successive weeks. In June, he won the Pennsylvania Amateur Championship and finished as the low amateur in the Philadelphia Open at Pine Valley two weeks later. Shortly thereafter, he won the Merion club championship.

At the U.S. Amateur in September of 1923, played at Flossmoor Country Club in Illinois, Marston defeated some of golf’s biggest names. He came from behind to beat Jones (then the current U.S. Open champion) in the second round, topped Joseph Wills of Ohio, 4 and 3 in the quarterfinals, defeated former U.S. Open champion Francis Ouimet in the semifinals, 3 and 2, and beat defending champion Jess Sweetser in a 38-hole final match.

To cap his season for the ages, Marston returned to Pine Valley in October where he won the famed Crump Cup.

Born in Buffalo, N.Y., the Marston family moved to Cranford when Max was a child. He attended Pingry School in Elizabeth and the Pawling School in New York. As a youngster, the Marstons were members of the Cranford Golf Club before they joined Baltusrol Golf Club. While a member of Baltusrol, Marston won the NJSGA Amateur Championship in 1915 and 1919, and he won the Baltusrol’s club championship from 1914 through 1916. During these years, Marston served in the U.S. Navy during World War I.

After finishing his service in the U.S. Navy and winning his second NJSGA Amateur title in 1919, Marston joined his father’s investment firm in Philadelphia. He became a member of Merion Golf Club, and later Pine Valley Golf Club.

When Mrs. Mason won the sixth annual U.S. Senior Women’s Championship at the Atlantic City Country Club on Oct. 6, 1967, she finished with a three-round score of 236 that broke the former record of 239 set in 1963 by NJSGA Hall of Famer Maureen Orcutt and Allison Choate of Rye, N.Y. (Choate won that year in a playoff.)

She was truly the outstanding player in the Garden State Women’s Golf Association for a sustained period of time. Mrs. Mason, a resident of Englewood, won that organization’s match play title eight times, its Elizabeth Goss Round Robin 12 times, its stroke play championship six times, and its Better-Ball-of-Partners event three times with partner LaJunta White.