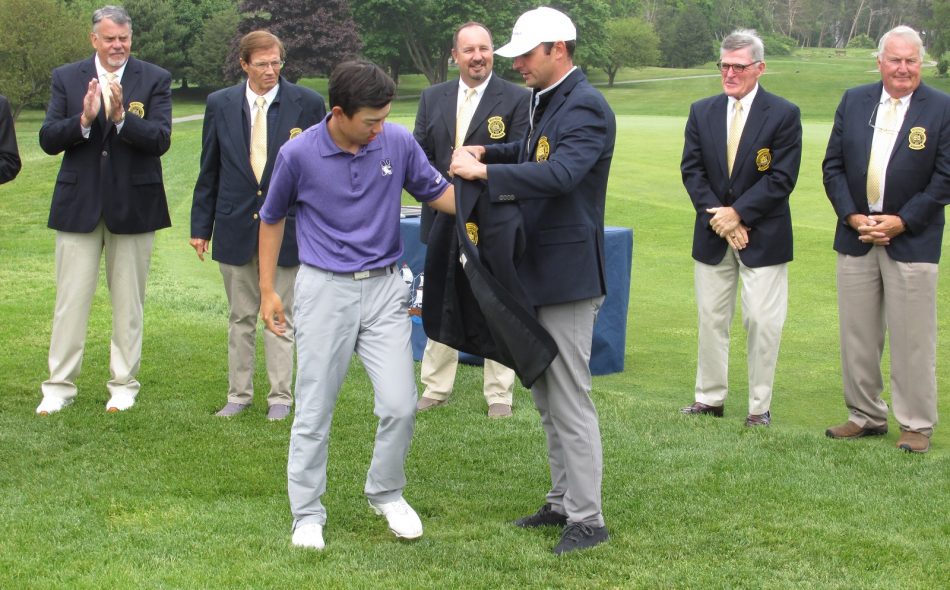 Brookline High School senior James Imai was in a class of his own at the 55th annual Hornblower Memorial. Imai celebrated his impending graduation with a textbook demonstration on how to play the par-69 Plymouth Country Club, one of New England’s iconic Donald Ross layouts. His two rounds of 68-66 for a four-under par 134 earned him the valedictorian honors.
Only two others, both college golfers, came close to matching Imai’s report card. URI’s Dillon Brown and UConn’s Jimmy Hervol both shot 68-67 to share salutatorian status at three-under. The rest of the 63-man 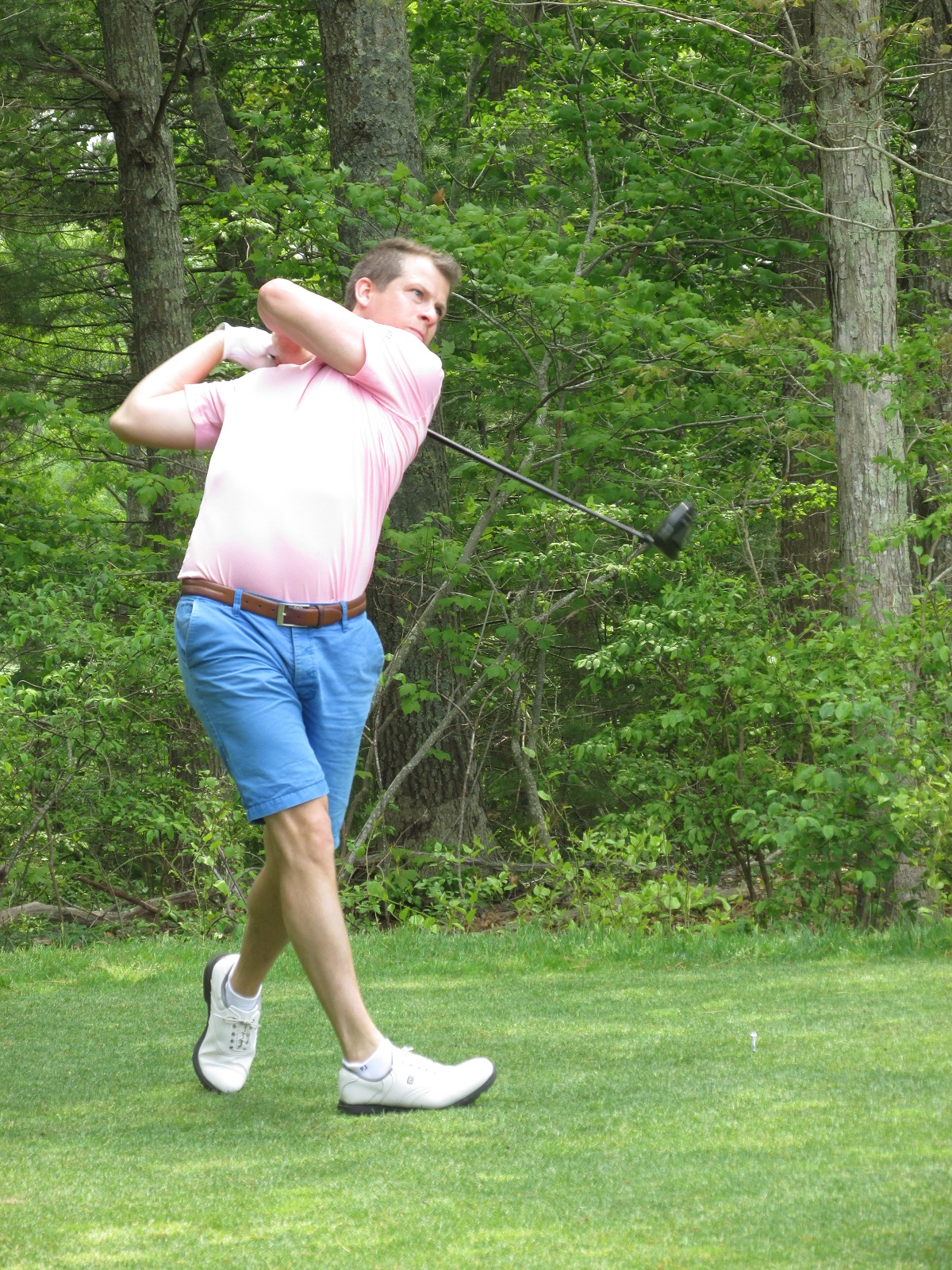 Lefty Ben Spitz from George Wright GC finished T-5 this year with his 70-69; he shot 68-71 last year to finish third.

field—the cut after Friday, to low 60 and ties from 156 entrants, came at 74—could do no better than even par. St. Anselm College grad Sean Fitzpatrick, who led the Hornblower in 2016 with a three-under 66 and is a perennial contender, and URI stalwart Brandon Gillis, who wrested the Hornblower title from Fitzpatrick in 2016, both shot 70-68.
James Imai also won the Junior Medalist trophy, defeating runner-up Colin Spencer, a 15-year-old from Cummaquid GC, who shot 71-75.
Defending champion Matt Parziale helped James Imai into his Hornblower sport coat at the “graduation” ceremony on the 18th green. He commented on Imai’s victory. “James played about as well as anyone can on this most challenging golf course. He defeated a very talented field, and he should be very proud of his accomplishment.” Parziale shot 71 on Friday to be in contention, but his 77 on Saturday dropped him into T-40.
Not to make excuses for Parziale, but he didn’t return from playing in the U.S. Amateur Four-Ball Championship at Bandon Dunes, Oregon, until Thursday. He and partner Herbie Aikens, who came in second recently in the Mass Four-Ball Championship at The International in Bolton, made it to the quarterfinals before losing 3-2. Aikens, usually near the top of the leaderboard like Parziale, shot 77, and did not make the cut. Another casualty was first-round leader Mike Kennedy from New Haven CC; his two-under 67 was followed by a front nine 40 on Saturday, which included a triple on the par-4 5th, and a final tally of 78 (T-23).
Hornblower champion James Imai summed up his victory. He said, “I had two keys: one, my putting, and, two, staying patient. I knew that—if I stuck to my game plan and remained very disciplined, trying to keep the ball in the safest spots—I should be able to make some putts and avoid three putting. And that’s exactly what happened for me today. 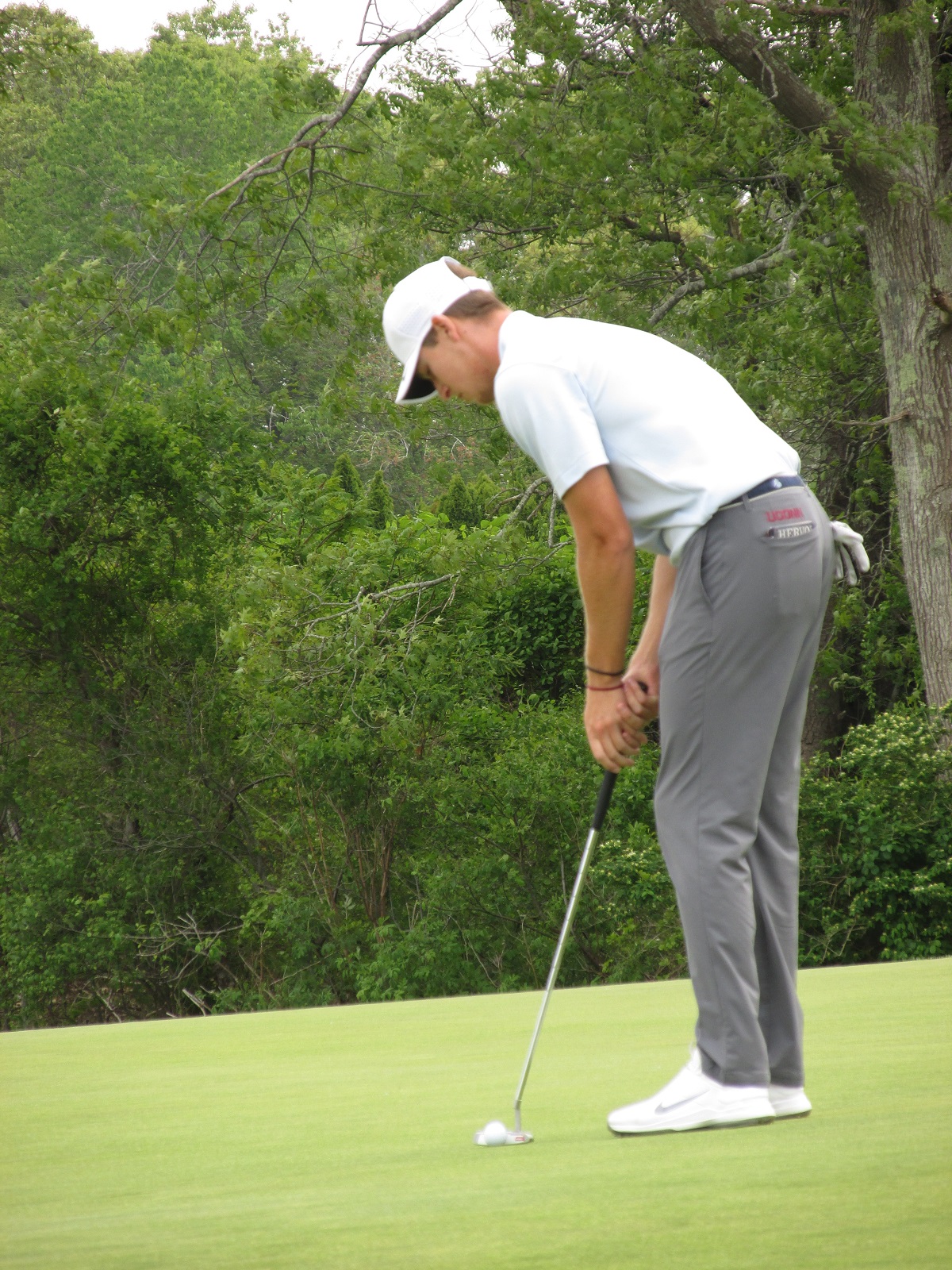 Jimmy Hervol from Hopkinton CC knocks in his six footer for birdie on 18 to tie Dillon Brown for second place, one shot behind James Imai.

“I made a seven footer for birdie on one. And then I made two good pars on the tough second and third holes. My plan worked well with birdies on five and six, a huge boost for me, but, if you want to know the turning point in my round, it was negotiating holes 7, 8, and 9. I made three straight five footers for par to shoot 31 on the front. And then, when I birdied the difficult 10th [178-yard, uphill par 3 with a narrow and precipitously sloping green] from 10 feet to go four under for the day and five under for the tournament, I knew I had a chance if I could only sustain the patience that had gotten me to this point.”
Imai added another birdie on the par-4 14th, and his game plan remained faultless through 16 holes, building a three-shot lead over Dillon Brown, who had won the Hornblower Junior Medalist trophy for the past two years, and a four-shot lead over Jimmy Hervol, both of whom were in the final group with Imai in the group ahead. Then, when Imai bogeyed both the 17th and 18th 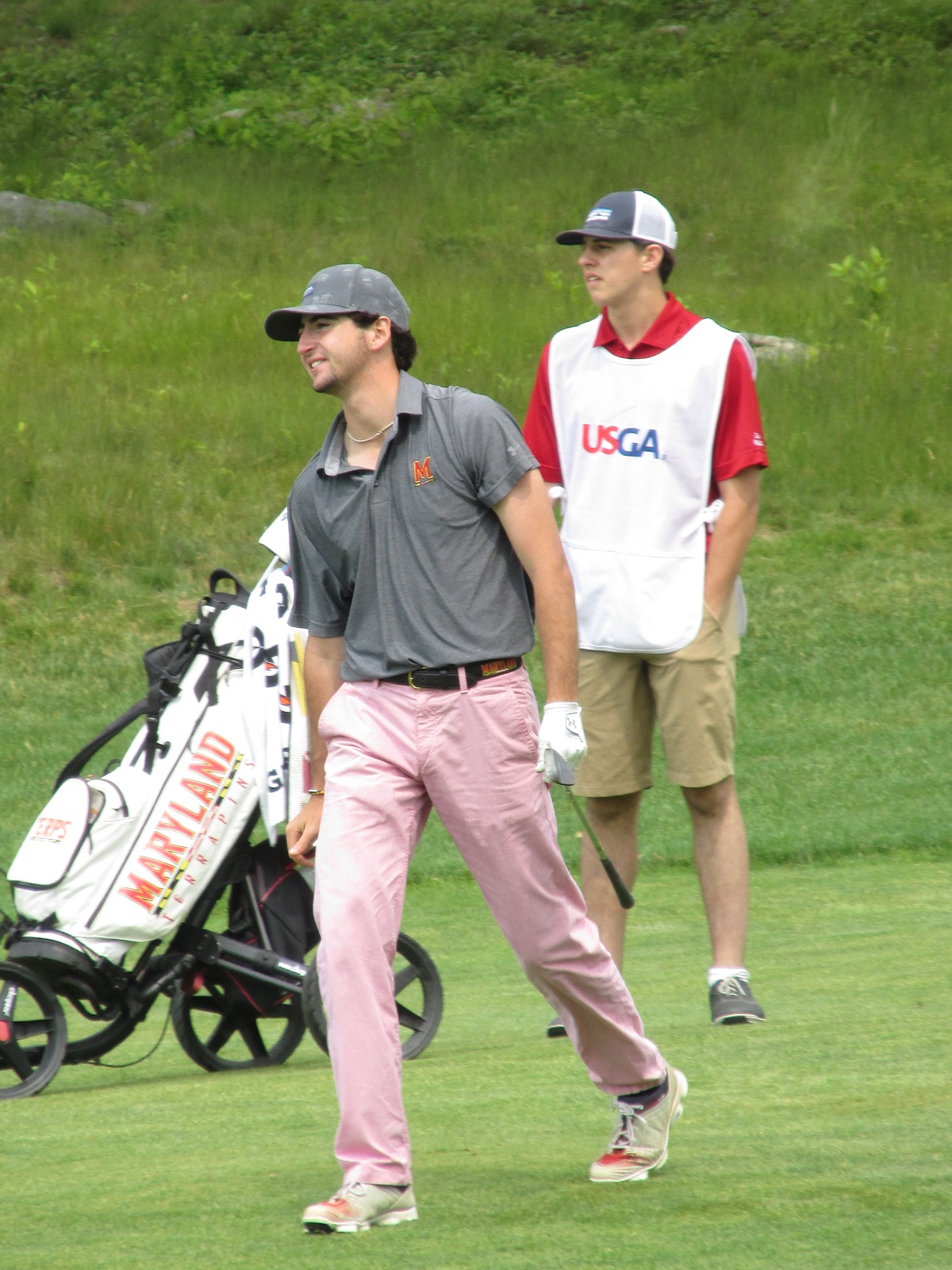 U of Maryland golfer Dillon Brown and his caddie carefully watch the second shot on 18. A birdie would have forced a tie with James Imai, but Brown could not convert the putt.

holes, Brown had a chance. He said, “As I was standing in the fairway on 18, I knew that, if I birdied the hole, I would force a playoff. Unfortunately, I didn’t get my second shot as close as I wanted and didn’t make the putt. But I had another great Hornblower, and I congratulate James on his impressive victory.”
Tied for sixth place with identical scores of 70-69 were Ben Spitz, from George Wright, who finished just out of the lead last year, and Tim Umphrey from Tatnuck CC and a member of the UConn golf team. Nick Harrington was alone in 8th place with his 69-72 (141). Harrington belongs to the E Club of CT and is the third member of the UConn golf team to finish high in the Hornblower standings.
Five players shared ninth place with 142 scores: Greg DiBona (72-70) from Duxbury, MA; two-time runner-up Davis Chatfield (71-71) from Wannamoisett CC; Brett Krekorian (69-73) from Indian Ridge CC; Owen Quinn (74-68) from Wachusett CC; and Ryan Riley (72-70) from Pine Oaks CC. The best finish by a member of the host club was Jim Bandera, who shot 71-73 for a T-15.
Imai will matriculate at Northwestern University in Evanston, Illinois, this fall, but he will have a very competitive summer before packing up his clubs and heading due west. He said, “I chose Northwestern mainly because of the coaches. Coach Inglis [head coach] and Coach Goss [director of golf and player 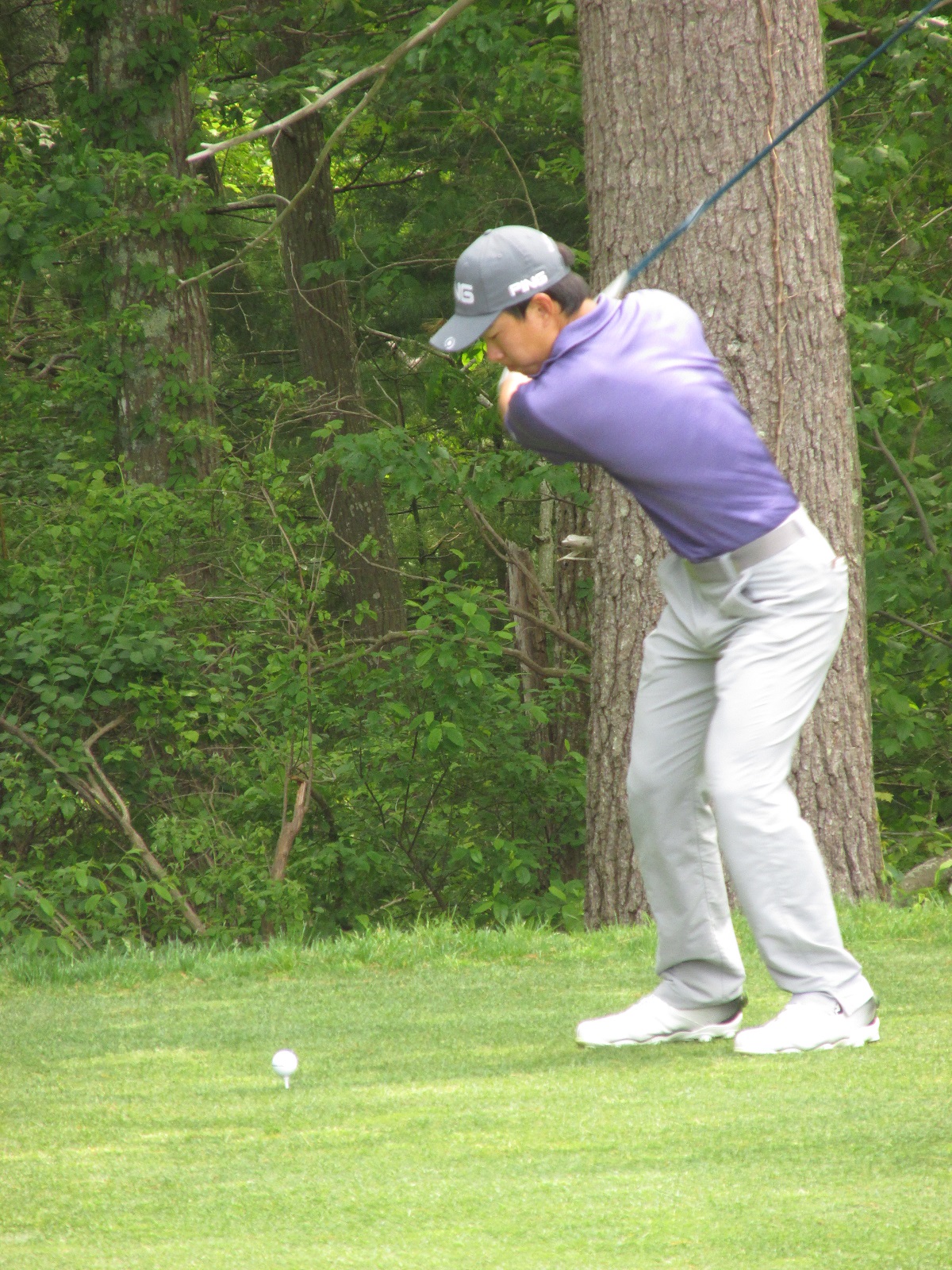 James Imai, who will attend Northwester in the fall, drills a drive. His effective game plan relied upon clutch putting and patience.

development] made the difference. For a golf team in the north, they know how to recruit players and improve their games. Especially Coach Goss, who is an expert on teaching short-game skills and who understands how the professional golf game works. And that’s what I want to do: use college to get ready for the professional golf life.

“I’ll be playing in the Mass Open [Vesper CC] next week and the Western Juniors [Rich Harvest Farms, IL) right after that. Then, hopefully, the U.S. Junior [Inverness Club, Toledo, OH] and, if not, then the Mass Am [The Country Club, Brookline]. The Mass Junior [Crumpin-Fox Club] is on my schedule, too. Then, we’ll see what happens after that.”
At his victory ceremony on the 18th green, Imai said, “The Hornblower was a superior event from beginning to end. I cannot thank Mike Ellis, Mike Roy, the tournament committee, and the members enough. It is one of the best amateur tournaments that you could play in. Even if I hadn’t won, I would have had a blast and would have wanted to return in the future.”

Chairman Mike Ellis and his committee and Head Pro/Director of Operations Mike Roy were dazzled both with Imai’s impeccable golf and with his mature demeanor. Roy said, “What a remarkable achievement for this young man! His game is really solid, and he should have a great career at Northwestern. We all wish him well.”

Scores can be accessed at www.event-man.net/leaderboard.aspx?cid=358&en=1
(Photography by Leigh MacKay)