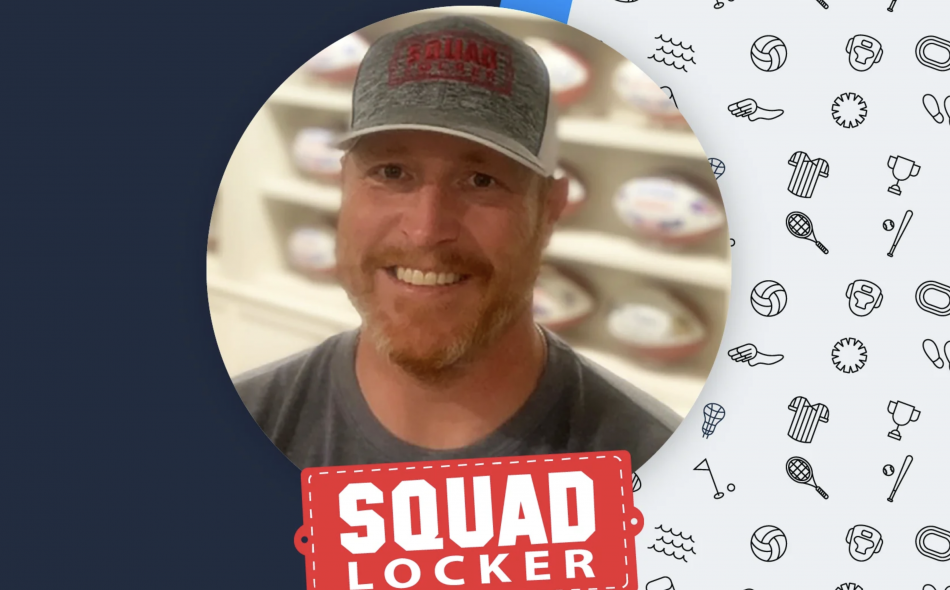 WARWICK, R.I. – Oct. 12, 2020 – SquadLocker, a leading provider of online tools and services for teams and organizations to manage custom apparel and equipment purchasing, signed Dan Koppen to its team as Enterprise Brand Advocate. Koppen played in the NFL from 2003-2013, nine seasons as an offensive lineman for the New England Patriots, which included five trips to the Super Bowl and two rings. He is helping to cultivate brand awareness for SquadLocker as the company continues to ease the burden for entire sports leagues and schools in acquiring custom uniforms and apparel.

“SquadLocker is doing amazing things for sports teams and schools, particularly with the distractions of today as coaches and teachers are often side-tracked from their number one mission of teaching and mentoring students and youth athletes,” said Dan Koppen. “As SquadLocker continues to eliminate the heavy tasks associated with selecting, purchasing, and delivering custom uniforms and gear so more time and attention can be focused on our youth, I look forward to working to get the good word out to help others.”

Koppen made his mark as a three-year starter at center for the Boston College Eagles before being selected by the Patriots in the 2003 NFL Draft. The Whitehall, Pennsylvania native took over as starting center as a rookie, winning back to back Super Bowls in his first two seasons. Koppen was named to the Patriots’ 2000s all-decade team in 2010, later released by the team in 2012. He played two seasons with the Denver Broncos in 2012-2013 before suffering a torn ACL and retiring.

After football, Koppen was an analyst for NBC Sports Boston and co-founded LineSider Brewing Company in East Greenwich. For the last four years, he has served on the board and coached in the East Greenwich Flag Football League. Along with his wife and three children, he resides in Rhode Island, headquarters of SquadLocker’s wholly-owned 50,000 square foot state of the art manufacturing facility where all the logistics and decoration for producing custom team uniforms and player gear are managed.

“Dan has already changed the dynamic of our meetings with schools and youth sports organizations, and coaches and mentors love speaking with him as he connects at a very personal level,” said Gary Goldberg, CEO of SquadLocker. “I can’t wait to see Dan and the rest of our team continue to develop content that is informative and entertaining. Lots of exciting ideas are percolating.”

Meet Koppen in his first SquadLocker Ask Me Anything (AMA) webinar on Wednesday, October 14, 2020, 12:00 p.m. – 1:00 p.m. EDT. He enjoys talking about his first memories of being coached, the coaching style and demands of Bill Belichick, pre-game anxiety and being ready to play, learning time management skills while playing for Boston College, and more.

Blur The Line Between Life On The Course, and Off