Be Your Own Tour Caddy 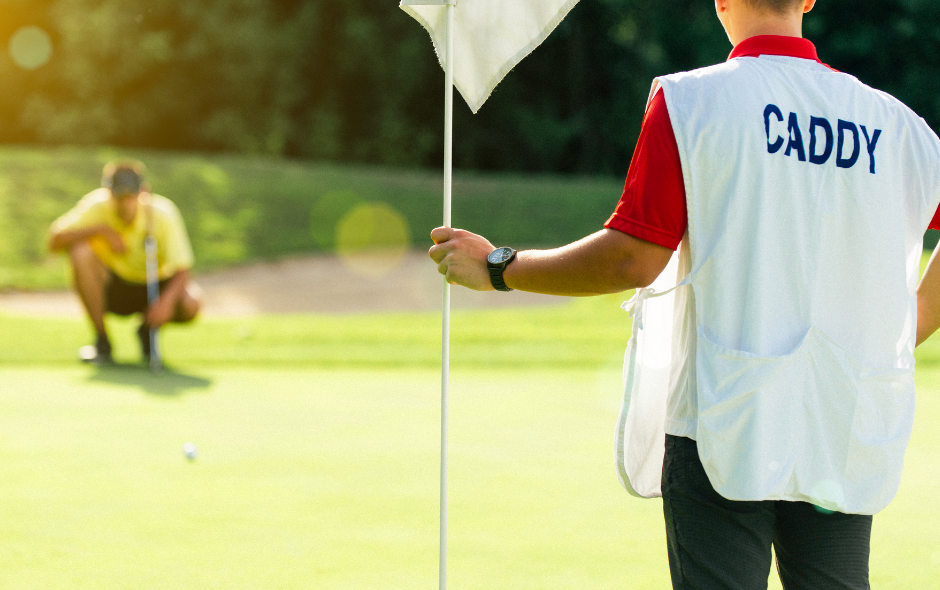 When the U.S. Open is played at The Country Club in Brookline, Massachusetts, we will have the opportunity to enjoy world-class golf and root for our favorites plus the chance to see professionals helping the professionals. That is, professional caddies aiding the players over the already difficult golf course that has been set up by the United States Golf Association to test the best players in the game.

There’s a lot we can learn from how a professional caddie does his job that can be applied to our own games, insights recreational players can use to improve. Not swing tips, but the ways two professionals, caddie and player, form a team with the caddie an integral member of the partnership.

In setting the stage for being your own tour caddie, it is good to remember a quotation from Bobby Jones, “Competitive golf is played mainly on a five-and-a-half-inch course.. the space between your ears.” So, though we are heading to the course this weekend for the weekly skins game and not the last two days of the U.S. Open, the ways tour caddies manage a round are exactly suited to our needs.

A tour caddie knows his player’s strengths and weaknesses and you should evaluate yours. If you usually hit fades, don’t try to hit a hook around that tree in front of you but consider a pitch out or full shot that ends up short and right of the ideal target. Your score may suffer by a shot but more likely you wouldn’t be able to hit that tree-hugging hook much less get the ball on the green with the potential cost of multiple strokes.

When contemplating a tee shot, sometimes going for the maximum distance is not the best plan. The tour caddie in you (I used to call mine “Looper”) should look at what drive will make the next shot easier or even the shot after that easier. A good example is a hole where the best angle to the green is from the right, but a hazard is within the driver’s distance on that side. The left side is open but with the potential of a harder approach, perhaps over a steep-faced bunker. Looper should look at the possibilities, the risk, and reward, then help you decide based on the knowledge of the shots you typically hit. Maybe a 3-wood from the tee down the right short of the hazard or a driver aimed into the left rough that fades back into the fairway. Not difficult to figure out but too often it’s not the way recreational players think. They just grab the driver on every par four and par five and swing away.

Speaking of drivers and 3-woods, everyone knows the driver goes farther and is less accurate, right? Well, it’s not. Shot Scope analyzed thousands of shots by recreational players and though the driver averages about 30 yards longer than a 3-wood, it is just one percent less accurate in terms of fairway hits. Being a true professional, Looper will take such information into account for future shot decisions.

A pro tour caddie, in addition to carrying a 40 lb. bag for 18 holes and keeping the clubs clean, also helps figure the distance for the next shot, the effect of any wind, and how the amount of uphill or downhill slope will add or subtract from the carry and roll. This isn’t as straightforward as it sounds and experience counts for a lot.

A critical thing Looper can do is to figure out the distance an approach shot should fly, i.e., where it should land, not where it will stop rolling on the green. Recreational players often don’t generate much backspin on iron shots so spinning the ball back as the pros do is probably something we can only dream about.

Exact control and “sucking it back” comes from having lots of spin on the ball. However, if the ball you’re using has a hardcover such as Surlyn, which does not spin as much as the softer urethane cover ball touring pros use, then chances are you won’t be able to get sufficient spin to “suck it back” and if you are lucky, just enough backspin so the ball will stop within a reasonable distance on the green. The unfortunate fact is that many weekend players hit irons a little fat. It doesn’t take much to destroy any possibility of generating high backspin so the ball tends to roll out more on the green.

Knowing all this Looper has figured out the yardage to the correct landing point allowing for some bounce and roll and that will give you the confidence to make the best swing you can.

When figuring approach shots, an important tip is to not obsess over the wind, slope, lie, hazards, and all the other factors. Chances are, and experienced caddies know this, they all are less important than a clean square impact on the ball. Once you and Looper have done all the calculations and made your mind up on the club selection, he simply says, “You got the right club.”

Now, all you have to do is hit it.

Looper can be especially helpful when it comes to putting. Sure, figuring the line and break is important but he can also remind us to not pay too much attention to the mechanics. The practice green is the place to figure out “how” not during the round. A pre-shot routine that minutely grinds out the stance and the grip and the weight balance and head position and…well you get the idea, simply creates tension, uncertainty, and often poor results.

The old idea of picking out the line and then a spot to roll the ball over is still applicable. You and Looper can jointly determine the line and proper speed, but truly good putters work at having the same approach as a young kid who, not knowing any better, just steps up and knocks the ball in the hole.

Another way professional tour caddies help their players is with the mental and emotional side by helping them focus while preparing to hit a shot and then shifting their attention from walking between shots to something else. It’s almost as though Looper can get your mind to switch on and off to relieve the tension rising from continuously concentrating on this game, which we will never conquer.

This is really important when you have hit a truly horrible shot, maybe out of bounds or into the water or even bladed the ball over the green. Looper, the tour caddie in you, can step up with something simple but useful like, “OK, let that shot go there’s nothing we can do about it.” This helps us focus on the next shot; the only one that counts right now.

Being your own tour caddie isn’t easy, but it is something we all can do. Being our own friend on the course to make the round as much fun as possible is a big help, and who knows you might even enjoy the challenge.

10 Great Courses You Can Play in Massachusetts & Rhode Island