On The Road Less Traveled 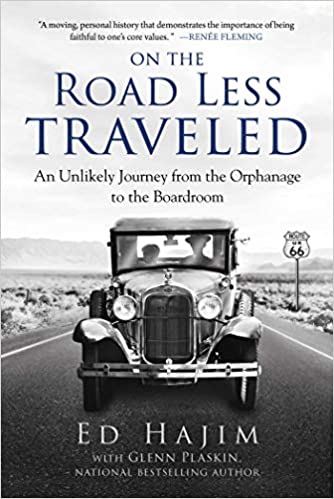 Ed Hajim, a founder of the award-winning Nantucket Golf Club, shares that not only has the club thrived for the avid golfer – but also subsequently, the club’s foundation is now among the largest on the island, providing college scholarships for high school graduates and a number of scholarships for vocational education.

In his memoir, ON THE ROAD LESS TRAVELED: An Unlikely Journey From The Orphanage To The Boardroom, Ed explains in his book how his wife, Barbara, planted the seed in his head to start the club.

At the age of 3, Ed Hajim is kidnapped by his father, driven cross-country, and told his mother is dead. He presses his face against the car window, watches the miles pass and wonders where life will take him.

In a memoir filled with human drama, wisdom and timeless life lessons, ON THE ROAD LESS TRAVELED: An Unlikely Journey from the Orphanage to the Boardroom (Skyhorse; March 2, 2021) tells the improbable story of how Hajim bounced from foster homes to orphanages, in a daily struggle to survive, to living the American dream as an accomplished Wall Street executive and model family man with great moral fiber and the means to give back to a world that seemed intent on rejecting him.

It’s a powerful story touched with family trauma, deprivation, and adversity balanced by a life of hard work and philanthropy.

“While his childhood travails of loneliness, isolation, and poverty would have broken most people, Ed channeled his survival instincts and conquered his inner demons to become a loving family man and a beloved leader of people,” says Raj Echambadi, Dunton family dean at D’Amore-McKim School of Business, Northeastern University.

Hajim served as a senior executive at such firms as E.F. Hutton, Lehman Brothers, Furman Selz and other financial institutions, regularly transforming fledgling operations into profitable growth machines. His life accomplishments were rightfully acknowledged in 2015 with the Horatio Alger Award, given to Americans who exemplify the values of initiative, leadership, and commitment to excellence and who have succeeded despite personal adversity.

On the Road Less Traveled is packed with anecdotes of how Hajim used his ingenuity to achieve his goals and also provides insight into what he learned from some of his life’s defining moments:

Throughout his career, Hajim was guided by his instincts to know when a situation had run its course. “Sometimes it’s better to sever ties and leave on your own, even if the next step is unknown,” he writes. “That’s often the road less traveled, but it’s so worth the journey.”

The “unknown” also played a major part in Ed’s personal life, when a long-kept secret he couldn’t possibly have imagined was revealed.

Joel Seligman, president emeritus of the University of Rochester, says, “Ed Hajim’s On the Road Less Traveled does full justice to a remarkable life lived by a remarkable man. You will learn much about why one man who began with nothing achieved so much and did so much for so many.”

“A ‘must-read’ in every school in the US.” —Barbara Hackman Franklin, 29th U.S. Secretary of Commerce

“Ed is the real deal…He epitomizes the eminent orphan documented by Malcolm Gladwell—someone who is able to turn great disadvantage into strength and success.” —Mark Zupan, president, Alfred University

“This narrative is not just a rags-to-riches tale. It’s a story of the will to overcome the kind of adversity that can crush the spirit…but not this one.” —Sol Gittleman, professor and provost emeritus, Tufts University

The son of a Syrian immigrant, is a seasoned Wall Street executive with more than 50 years of investment experience. He has held senior management positions with the Capital Group, E.F. Hutton, and Lehman Brothers before becoming chairman and CEO of Furman Selz. Hajim has been the co-chairman of ING Barings, Americas Region; chairman and CEO of ING Aeltus Group and ING Furman Selz Asset Management; and chairman and CEO of MLH Capital. He is now chairman of High Vista, a Boston-based money management company. In 2008, after 20 years as a trustee of the University of Rochester, Hajim began an eight-year tenure as chairman of the university’s board. Upon assuming that office he gave the school $30 million—the largest single donation in its history—to support scholarships and endow the Edmund A. Hajim School of Engineering and Applied Sciences. Through the Hajim Family Foundation, he has made generous donations to organizations that promote education, health care, arts, culture, and conservation. In 2015, he received the Horatio Alger Award, given to Americans who exemplify the values of initiative, leadership, and commitment to excellence and who have succeeded despite personal adversities.

Why You Should Get a LiFeP04 Battery for Your Golf Cart


Attend the Official Grand Opening of the Racquet Complex!