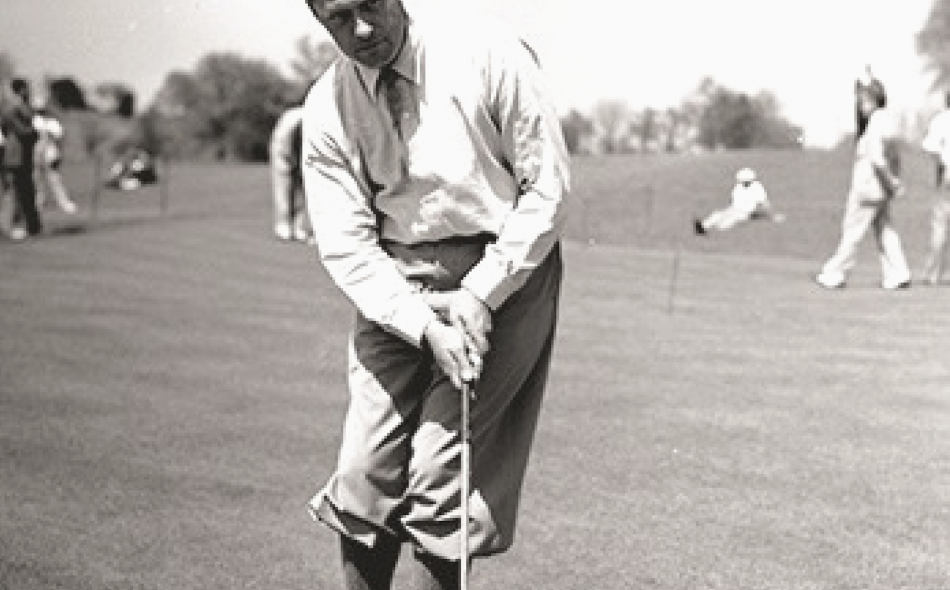 Maybe it’s the fading of the new millennium, or the new pain in my left knee when I try to turn an iron out of the rough, but lately I’ve been thinking about the timeless. What endures? The antique clubs, the fabled courses and storied tournaments, what makes them timeless? Why do we look to our origins at all?

I guess timelessness is the quality of excellence. We pick through the junkyard of history and memory to find what has worked. We rummage through the treasures of time to find what stands firm. What we haul out of the past, what excellence we stand by, we hope defines the future.

In the same way, golfers are like salmon. Some inner voice that calls us to our origins. “Someday I’ll play St. Andrews.” Troon. The Snake Pit. Amen Corner. The Bear Trap.  Horrible Horseshoe.  Impossibly we want to swim upstream, to get to the sources. We go against the limits of our credit line and account balances, and against all the good reason of our mates. We go back to be part of legend, if only for an afternoon, to stand in The Forever of that hundred acres of heather and frustration where golf is said to have begun.

I got to thinking about the origins of golf in America. Seems a lot of arguments have gone on through the years about where and when golf started in America, when the first attempts to beat the devil took place. The first strokes were probably taken by renegade British officers during the revolution. This would be somewhere in the Carolinas. But not until much later, 1887, were the first links put in at Dorset Field, in Dorset Vt.

But Boston has its place in golf’s early history, and this seems fitting for the bastion of Puritanical America. The first public golf took place on Franklin Field, Boston. Franklin Park is a rural park spread out on the knobby, tree‑filled Scarborough Hill. In 1890, a fellow by the name of George Wright secured a permit from the police to play golf. The police sent a detail to protect the public from the nuisance of golf. No one got hurt, but the authorities remained terrified of the game, and didn’t allow golfing on holidays or weekends for some years.

By 1894, Willie Campbell had laid out the first nine hole course on Franklin Field, the second municipal course in the country. A round cost fifteen cents, or you could make two rounds for a quarter. The well‑heeled hitched the wagon and rode from Beacon Hill to Scarborough Down where the new game of golf was played.

And here the course remains. The whole feel of the place is old, from the border of field stone walls to the carriage trails to the ancient stone bridges. The course has been done and redone over the years. In the nineteen twenties, Donald Ross served as consultant to one of the makeovers, and the course retains a distinct Ross influence. Many of the holes climb, so that playing a round has the subtle moral element of ascending to each green.

Golfers like to think that nothing easy is satisfying. The holes of the William Devine Golf Course flirt around the highest elevation in the city of Boston. The first four holes allow you to get in your rhythm. They are wide and with little hazard. The only real trouble is at two where a rock the size of a house protects the green. If you don’t have your swing worked out by the fifth hole you’re in some trouble. On the fifth the course begins to swale and you get your first taste of the thick heather. It’s not uncommon to see half a man on the course, waist deep in an ocean of brown grass. The grass is a handicap eater, and will turn a once decent golf club into a mediocre sickle.

On the elevated sixth tee you drive off School Master Hill. The tee sits among the field stone ruins of a school house where Ralph Waldo Emerson held court. From that height you look out onto the stand of pine and elm that seals off the city scapes. The barricade of foliage invites you back to before the days of the manmade hazards.

George Lyons is a legend here, who tended a stable of golfers at Franklin Park for some years. Even he claimed, “no one burns this course.” An even par will take any day. And if you manage to be even after six, the seventh will have something to say about that. The seventh is known “Bewitched” and doglegs right around Scarborough Pond.

The view from the seventh tee is over the undulating middle holes, dotted by islands of tall brown heather and humpback swales. The holes are cut into the land, as the land is. The William Devine is nature’s idea of a golf course, more than man’s. Holes are made by the wind and local wildlife and hay grass and swales.

“Every angel is terrifying and everything beautiful is dangerous.” I wonder if the poet who wrote that line had played the twelfth hole at the William Devine. The locals call it Hey Man’s Corner. To everyone else it’s, “The Jones Hole”. When Bobby Jones was a student at Harvard, he spent many afternoons playing the twelfth over and over again. He called it the hardest four he’d ever played.

You drive from an elevated tee across a flat of a hundred yards, then the hole climbs left up three major swales to the top of Scarborough Hill. If you manage to take the woods to the right out of play, you’re looking at an uphill, blind hundred and fifty yard shot to the green. The Jones Hole rarely gives you the same shot home.

I sometimes wonder if Jones played the hole for its difficulty, or if he liked the view from the top of the hill. From the green on the twelfth you get your best view looking seaward. If, by some trick of fate, you have made the green in regulation, you might even enjoy that view and feel able to step from the hard earth and into the sea of green and blue.

There’s drama in these holes. It was Jones himself who said, “on the golf course a man may be struck down by an appalling stroke of tragedy, become the hero of unbelievable melodrama, or the clown in a sidesplitting comedy, any of these within a few hours, and all without having to bury a corpse or repair a tangled personality.” When I read these words I think of life on the twelfth at William Devine. The moment you think you got the course licked it shows you a new face, a new twist in your fate.

Being a public course, golf is a little more casual at the William Devine. You’re as apt to get a recipe for pan fried chicken as advice on the swing. I’ve played with hippies turned businessmen, who discovered late that transcendent nature of golf. There’s out of work guys getting in a round between a cold beer and a broken heart. There are the dignified city men who stayed with the course, thick and thin, even when some of the back holes had been forgotten and couldn’t be played.

If you come to Franklin Park, you no doubt hear about The Commissioner. The Commissioner was a comedian who golfed in a shirt that read, “Lies Told. Widows Tended.” The Commish had a heart attack in the same place three times. Three, separate heart attacks while walking up the hill toward the eighteenth green. Three brushes with death trying to finish a round. According to legend, he came back the very next week each time because The Commissioner is “too mean to die.”

But the commissioner’s secret may be one we all someday need to know. Finishing a game of golf, finishing anything, is more important than finishing life.

Mark Wagner is a writer and farmer living in Dudley. He can be reached at markgwagner@charter.net.